This may be a good place to introduce yourself and your site or include some credits.

Our train was late out of Varenna but that led to some interesting conversations with other travelers. Especially Alessandro who talked with us a long time – he is from a village near Varenna and now completing his batchelor’s degree at Univ of Milan. When we mentioned we had climbed to the castle at Varenna, he said “Varenna has a castle?” we pointed it out to him on the hill above where we were… Just like all places, the locals don’t go see the sights… Here is Alessandro on the train

Lunch was not so interesting – sandwiches sold on the train.

The trip went well despite having to take a later train out of Milan – on the train from Milan to Monterosso al Mare, we had a compartment of six seats to ourselves which was very nice. Bill did some reading on the train- I warched the scenery and slept some.

At first it looked a lot like the scenery at home and then it became hilly around us and we spent about half the time in long tunnels, the last 40 min or so of the three hour ride were along the Mediteranean punctuated by tunnels. Here is a not so good view out the dirty train window.

At Monterosso we caught a small local train to Manarola. Both towns are part of the Cinque Terre.

The directions to our hotel were “follow the road up to the church, then up the stairs by the tower. Wow, was it ever UP! The hotel La Torretta, is owned by a young man and his mother. It is a beautifully restored and decorated and perfectly executed small Spa/B&B high up above Mediterranean. So picture you just arrived after 8 hrs of waiting for trains and traveling and climb the steep hill and stairs to check in. We were directed to sit on the terrace, given a glass of prosecco and a tray with strawberries and crackers with caviar while the owner opened the room and carried up our luggage (more steep stairs).

the view from the terrace…

We were told about the free activities – tomorrow is a hike and then free winetasting at a farm where everyone brings their grapes for pressing and processing – although it must not be everyone as we saw small presses at two houses on our walk up here.

Wow, the room kind of defies description and not sure the pictures do it justice either but here they are.

Refrigerator is stocked with free coke, fanta and bottled water. Homemade cookies and a note on the kitchen table, iPod dock, plasma TV (which I could do without but Bill likes it), bathrobes, view out the window of the town and the sea… Oh, and did I mention the decanter of fine whiskey? Seriously, I am not kidding and all for under $200 a night (low season still) Kevin, you should be here sipping whiskey with us!

– Posted using BlogPress from my iPhone

NOTE: Blogger lost some of these photos when it was moved over to Google. I can’t find a few of them anywhere so just descriptions.

Mostly for our daughter Katie – and anyone else interested. Day 1 –

I had Salmon Gnocchi with cream sauce – very tasty although Bill didn’t like it as much as I did. The slice of smoked salmon along with it was excellent. Bill had Risotto with asparagus which he thought was very good – the risotto was perfectly prepared.

Dinner at Ristorante La Vista at our hotel – Albergo Milano in Varenna. Great view of the lake and twinkling lights across in Bellagio and other towns. Hotel owner Egidio is waiter and host after retiring as chef recently. The new chef will obviously keep up the fine reputation as his dishes were excellent. Menu is limited as there are only 5-6 tables. We had sea bass with thinly sliced zucchini – just wonderful. Bill also ordered an appetizer dish – octopus croquettes which was tender, tasty and unusual!

Bill’s last course was cheese and that was a pear stuffed with fresh soft goat cheese and carmelized nuts – very yummy!

We met two sets of Americans who are staying at our hotel and had a fun conversation at dinner. There was a group of Italians also and when they arrived it got noisier!

Lunch was in Bellagio, at a very cool but very small wine bar – Enoteca Cava Turacciolo – I had a salmon marinato con costini – marinated salmon on toast (yes, I love salmon) which I loved although it was very simple. Bill had Lasagna a la Bolognese which was good but different according to Bill – however I noted that he ate every bit. We also got a plate of shaved Parma ham donated by the other table of people in the restaurant – more about them in another post. Of course we had wine – Bill had a kind of sparkling red called Bonarda Marchese Adorno and I had a red called Barbera Vigna del Rei which we liked so much we bought a bottle.

Dinner at il Caminetto in Perleda started with a trip up the mountain – they come and pick you up for a crazy ride full of switchbacks….this is the restaurant that gives cooking lessons but we couldn’t do that as they don’t offer it on weekends.

We were picked up by Chef Moreno at 7:30 and were driven back at 10:30. We asked for his recommendation and he suggested we order one of his offerings (and he picked forvus) of each course of licsl specialties and share it and that was perfect and kept the cost reasonable.

First was three homemade pates and toast. Then prosciutto and salami – and we were introduced to the people at the next table as “this is the butcher who made the salami and meats”. They loved it when we told them as we left that the meats were “molto bene”.

They were served with a bit of marinated green tomato, dried red tomato and a small onion all of which I loved.

Next was the primi or pasta course of risotto – not sure how that was prepared (what the flavor was) but very tasty.

last was Rouston Negaa – veal escallopes with sage and white wine, tender and tasty with potatoes and green beans.

We were too full for dessert but he brought us a very refreshing after dinner drink of limoncella.

So, Katie, no gelato yet and in fact too full for dessert!

Now it is bedtime and tomorrow we leave Lake Como….

Foggy day – rain was expected but never showed up- the alps were shrouded in fog and clouds but the peaks showed through some of the day and that seemed to make them look even taller and almost unbelievably steep. 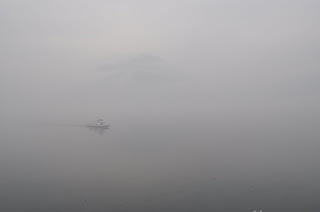 We decided to take the ferry to Bellagio across the lake. It’s a much bigger town with many more shops.   Did some window shopping and walking  – here are a few sights we found interesting… 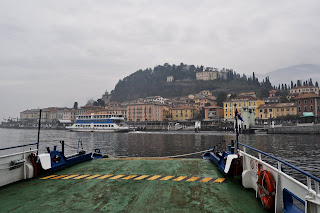 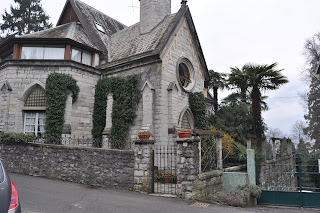 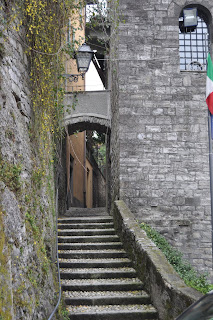 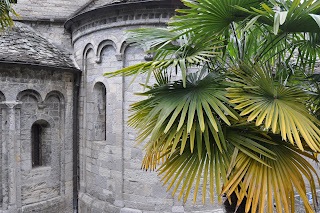 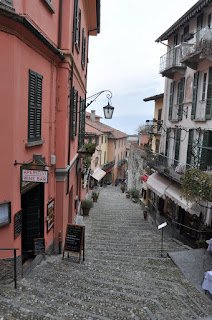 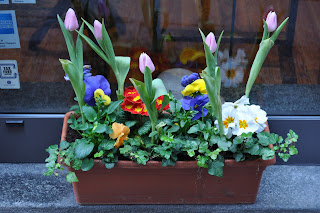 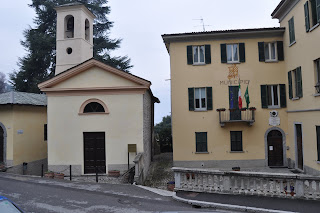 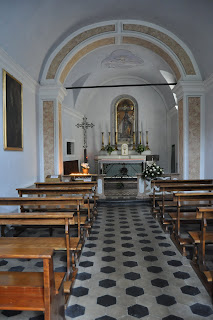 We found a little spot for lunch at a “wine bar” or enoteca..

It had a table of 7 people, us and 2 other tables just for wine service. The other table had some interesting characters – Americans of course – they were all related in some way and the one man was obviously the dominant personality. Turns out he’s some sort of executive at Apple – as he put it, there’s Jobs and the next-in-command and then he’s “just under the radar”. They shared some of their food with us – they went through 4 courses and several bottles of wine and next were going for facials and spa treatments at their hotel in Bellagio 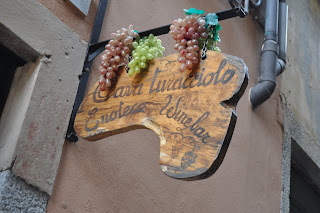 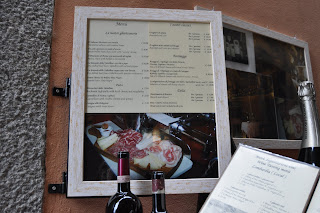 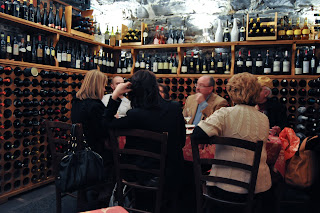 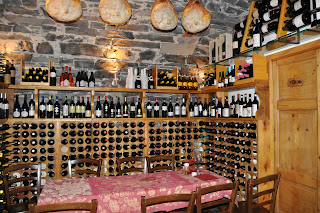 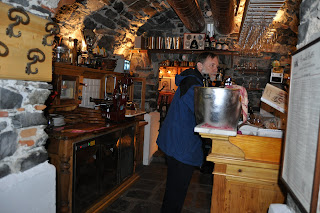 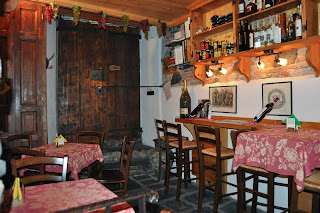 – we trouped back to our ferry to Varenna and our spa-less little hotel. And not only no spa but no rest – Bill had me hiking up the mountain to the old Castello di Vizeo above Varenna. It’s called a 1/4 mile hike but I think that is the change in latitude and longitude without taking into cosideration the steep climb!! On a good day the view would be breathtaking but while we didn’t get that view, we did get out of breath….

The castle is largely ruined

but there is a large tower you can climb – more steps! 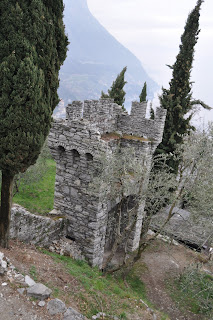 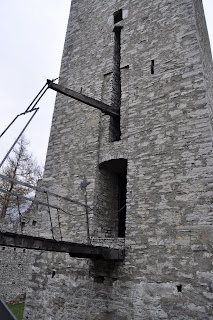 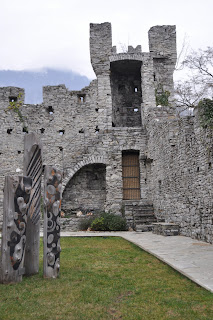 and the escape route in case of attack…. 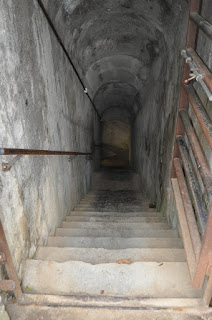 After a two hour layover in Atlanta, where we had some free wine and a snack in the Delta Club

we took off for Milan.We landed basically on time – we actually slept about 4-5 hours so good to go! In the Atlanta airport there were several pianists although not easy to hear, but for Katie I had to note this – this one was playing Fur Elise….

We took a bus to the Milan Train Station which is one of those gorgeous big European stations. Almost as pretty as churches! Train to Varenna was about an hour and left exactly on time- much of it through Milan and suburbs but then suddenly we could see the Alps and then Lake Como, a very long lake that we traveled near with lots of tunnels until Varenna came in sight

We walked about 1/2 mile to our hotel and checked in. The view of the Alps from our room was amazing even in the clouds and fog….

Albergo Milano was a great place to stay – nice room, the owners – Egidio and Bettina were wonderful as was the rest of the staff.  Here are a few pictures of the room.

Decided to go find some lunch and walked down to water level where we had seen a restaurant from our room. Here are a few views of the town and the restaurant.

This town was our introduction to steep, narrow streets with lots of stairs – that somehow always seem to be going up. Another feature we noticed, and we supposed for good drainage, is that the steps always slant down, making walking on them more difficult. Very old cobblestones too…

Most of the town has no automobile traffic….

Our restaurant Bar Il Molo – food was wonderful – described in next post.

Anyone want to go visit here? We used the Rick Steves book especially….. and hey, let me know, I’ll go back any time!!